2021 marks the return of Brood X, the most concentrated seventeen-year periodical cicada found throughout the eastern United States. In celebration of their emergence, here is a peek into their life cycle with reference to the timeline of their occurrence. Periodical cicadas have long been a fascination of scientists and naturalists and can be found throughout the Lloyd Library collection. Some notable representations are featured here. Explore full-text digitized copies of these works with the provided links.

The slideshow and video above are based on Insects, Their Means and Ways of Living written by Robert Evans Snodgrass (1875-1962) in 1930, as well as an interview with Dr. Gene Kritsky published in Lloydiana in 2021. An American entomologist and artist, Snodgrass’ early interest in science and penchant for Darwin caused strife within his religious family and community. He went on to study zoology at Stanford University which introduced him to field work and research. During his career, he published six books, 76 scientific articles and received the Leidy Award from the Academy of Natural Sciences of Philadelphia in 1961.

In this early mention of cicadas, author and English physician, Thomas Moffett described how they were like "grasshoppers without skin," alluding how the nymphs shed their skin when the emerge. Moffett, studied at Cambridge and Basel and attended the court of Elizabeth I. Researched and illustrated in the 1500's, this book was first published in Latin 30 years after the author's death. An English translations of Theater of Insects, (Moffett's only entomological book) was included in Edward Topsell's The History of Four-Footed Beasts and Serpents. 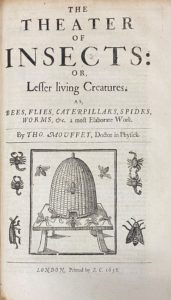 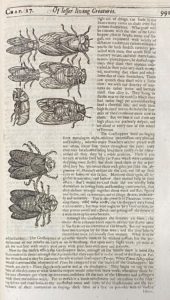 Historically, physicians often looked to nature. This book’s author, French physician and naturalist Gilles Augustin Bazin, captured the life of insects including cicadas. The seven leaves of plates in this book are trifolded in the back. 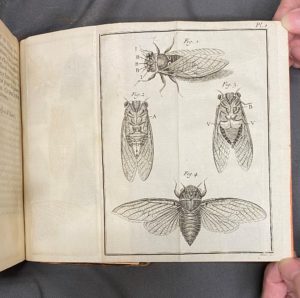 Due to similarities in appearance, cicadas have long been confused with locusts. They are actually different species.

Considered one of the fathers of German entomology, Rösel von Rosenhof was also a miniature painter. Depicting multiple cicadas on a page, his work is notable for the accurate and detailed illustrations of insects. As a child, he was influenced by naturalist Maria Sibylla Merian’s Metamorphosis Insectorum Surinamensium. Making a living as an artist, Rösel von Rosenhof was able to pursue his research of insects, amphibians and reptiles. 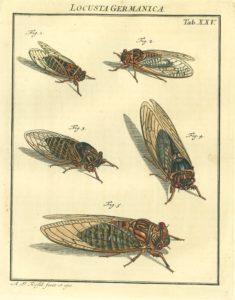 This book is appreciated for both its color and black and white illustrations that depict insects in great detail. While George Samouelle, a curator of natural history at the British Museum for twenty years, was credited as author, his contemporaries claimed that William Elford Leach was "the principal authority for Samouelle's work." 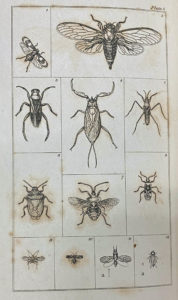 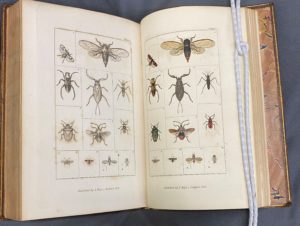 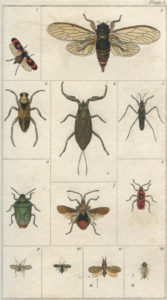 Recognizing the different appearance of insect varieties as well as their growth and maturation works on insects frequently presented them throughout their life cycles. In the top three figures here, Benedict Jaeger, a professor of natural history at Princeton University, illustrates two different types of cicadas as well as the transluscent shell of a mature nymph. 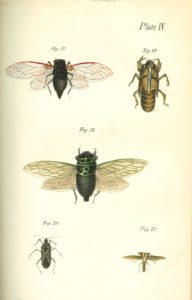 Books like John George Wood's Insects Abroad made natural history accessible to a non-scientific community in the 19th century. An ordained English priest who devoted himself to natural history and education, he was a prolific author and popular lecturer covering topics like entomology. 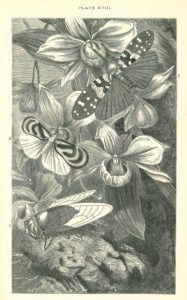 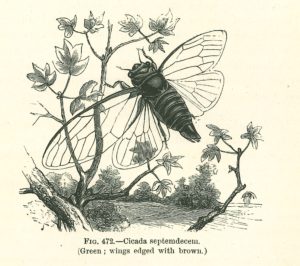 Fabre's Book of Insects was written by what might today be considered a citizen scientist. Self-taught French naturalist Jean-Henri Fabre was a popular teacher and author, known for his work on entomology. He wrote in colloquial style, presenting the lives of insects in biographical form based on his scientific experiments and observation. Many of his books were translated into English in the early 20th century. 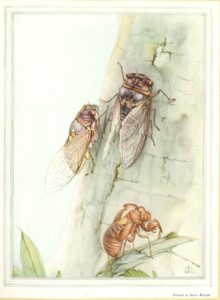